Why do quarters have ridges, and what does it have to do with taxes (and inflation!) 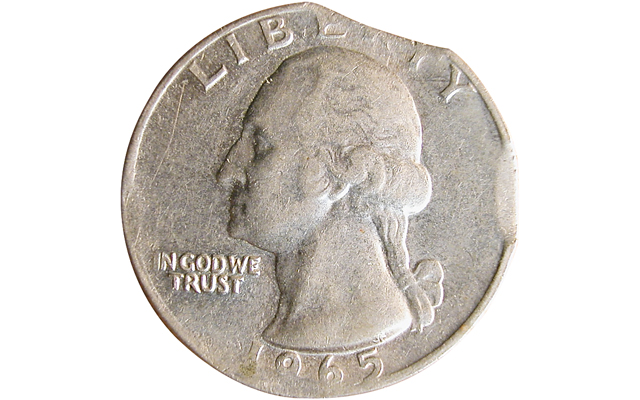 In my class, the very first tax law I mention, on slide two of day one, is named “An Act for Granting to His Majesty Several Rates or Duties Upon Houses for Making Good the Deficiency of the Clipped Money”. It was passed in England in 1696. It is known as the window tax, and it was a tax based on the number of windows you had in your house. In class we focus on this window tax, and I rarely mention what the tax was to pay for, specifically, “making good the deficiency of the clipped money”.  What is that?

Well, back when coins were made of precious metals like gold and silver, one thing that clever and criminal people would do was to “clip” the money, which was the shave off a tiny portion of the edge of a coin. If you shaved a tiny piece off of 20 1 pound gold coins, you might have another pound sterling worth of gold. You started with 20 pounds, but, now because you clipped, have 21 pounds. You debased the currency, and made yourself richer in the process. What does this have to do with ridges on quarters? Well, one way they started trying to fight this problem was to add ridges to coins, and, if the coin was lacking its ridges, you knew it had been clipped, and might be less willing to accept it. Ridges made coins much more clip-proof, and as a result, help resolve the problem of clipping coins. In the US, quarters, and dimes, half dollars, and dollar coins, all used to have some silver content, and that was why they had ridges–to stop clipping. We kept the ridges as a design feature even with the silver now gone.

So, the ridges make clipped coins easier to detect, making clipping more difficult. What does that have to do with taxes? Well, the window tax in this case was imposed to help resolve this problem of a debased currency, raising revenue to help resolve the issue of clipping. How do we debase our currency and what do we do, tax-wise, as a result? One way to think about debasing a currency is making more money, but not more stuff. The clippers do this illegally, but the government can also do something similar by printing more money–if you print more money, but their is the same amount of stuff, then that stuff will end up costing more money, and you get inflation.

How did England more than 300 years ago deal with the illegal debasing of their currency? Taxes, like the window tax, which if the money were not simply redistributed, would be deflationary, taking money out of the system, keeping the amount of goods constant, and helping the problem. Its not clear that this is what England was doing, but, they did levy a window tax to make good some clipping-related deficiency. And what proposals have we suggested these days to try to resolve skyrocketing prices, in part because we printed too much money? Decreasing taxes, for example, through gasoline excise tax holidays. So, there you have it. Ridged coins combat clipping, and people have both wanted to raise, and cut, taxes as a result of a debased, or inflated, currency.