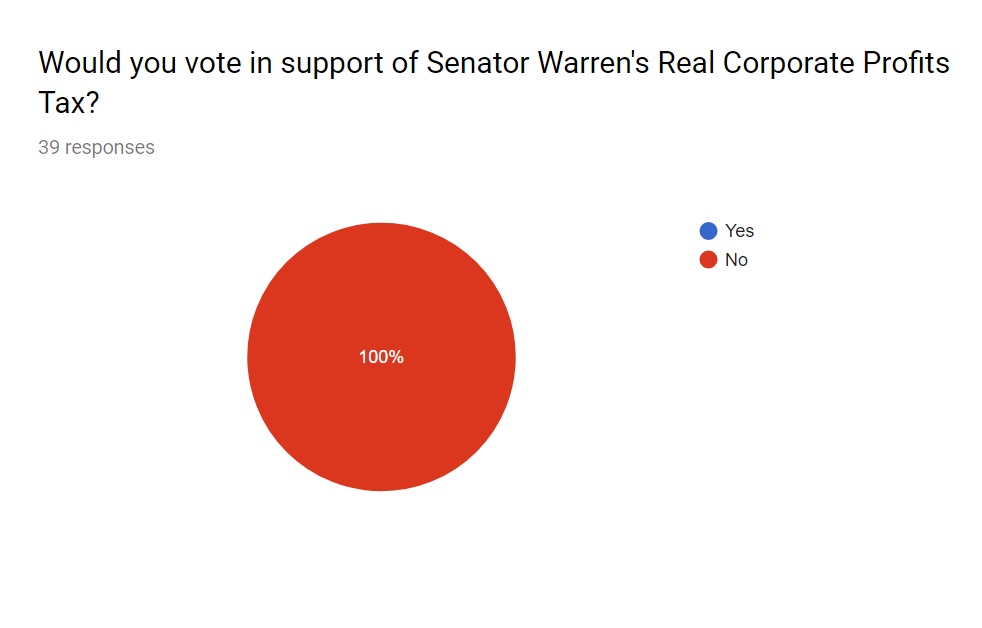 Elizabeth Warren is, according to PredictIt, the leading Democratic contender in the race for U.S.  president (other polling data varies). As we look forward to what tax policy might look like in the future, it is worth thinking about how Sen. Warren might tax corporate income.

Warren has proposed a new tax on corporate income, the Real Corporate Profits Tax. (A friend of mine quipped that he was not aware that we had been taxing fake profits all this time.)  The proposal basically boils down to taxing GAAP income (the income reported to shareholders) above a certain threshold, in addition to the corporate tax we already have in place. This was a policy that was proposed back in the spring, and on which I commented, along with Michelle Hanlon, and on which Scott Dyreng also commented. The short version of the commentary is that we don’t like the proposal. But what do academic accountants more broadly think?

Sen. Warren got opinions on the proposal from Emmanuel Saez and Gabriel Zucman, two well-known and very successful public economists (public economics is the branch of economics that studies, along with other things, taxes). Professors Saez and Zucman understand taxation well. However, they do not specialize in the tax base on which this tax is levied — financial accounting profits (GAAP income) — and do not focus on how firms manipulate their GAAP income.  Tax accounting academics not only have an acute understanding of taxation, but also of GAAP accounting profits. In his review of opinions on the tax, and referencing accounting professors, Peter Reilly of Forbes noted that “Maybe the Warren campaign should have reached out to a couple of them [accounting professors] when it came up with this scheme.”

This is not a new issue. For example, Jeff Gramlich wrote a paper on a similar tax policy that failed in the late 1980s. Michelle Hanlon, Stacie LaPlante, and Terry Shevlin wrote a paper on how information is lost when conforming book and tax income. Several other related academic papers were written.  So much has been written in this area, we have more than one paper summarizing all the other papers.  More than a decade ago, Lil Mills, along with John McClelland, wrote a well-thought out article about the implications of taxing book income.  Terry Shevlin and Michelle Hanlon wrote an excellent survey paper on what we know about the issue.  The accounting academy has opined, at length, about this issue over the last several decades.

I recently attended the University of Illinois/Deloitte Tax Symposium.  Michael Donohoe at the University of Illinois leads the charge on organizing this event, and does an excellent job inviting serious accounting academics.  The goal of the event is to disseminate academic accounting research, and only serious accounting tax academics are invited (with a few economists and lawyers pleasantly sprinkled in). After the conference, I emailed those tax accountants in attendance and asked if they would vote in favor of the proposal. I sent a link to the proposal, to the Saez and Zucman write-up, and to the thoughts of Dyreng, Hanlon, and Hoopes (me!).  And I simply asked, “Would you vote in support of Sen. Warren’s Real Corporate Profits Tax?”

I asked about 100 people, and got back 39 responses in the four days I left the survey open.  Of those 39 respondents, zero said they would vote in favor of the proposal. Zero.

Is what I did scientific in the pure sense? No. The participants were primed in specific ways with other opinions (on both sides of the proposal, but not equally). I did not collect IDs of participants, so I can do nothing to compare respondents to non-respondents.  Etc. Etc. Etc.  But 0% is a pretty low percentage of people supporting a plan, especially when those people are among those most qualified to opine professionally on the subject.

A couple representative comments from participants: