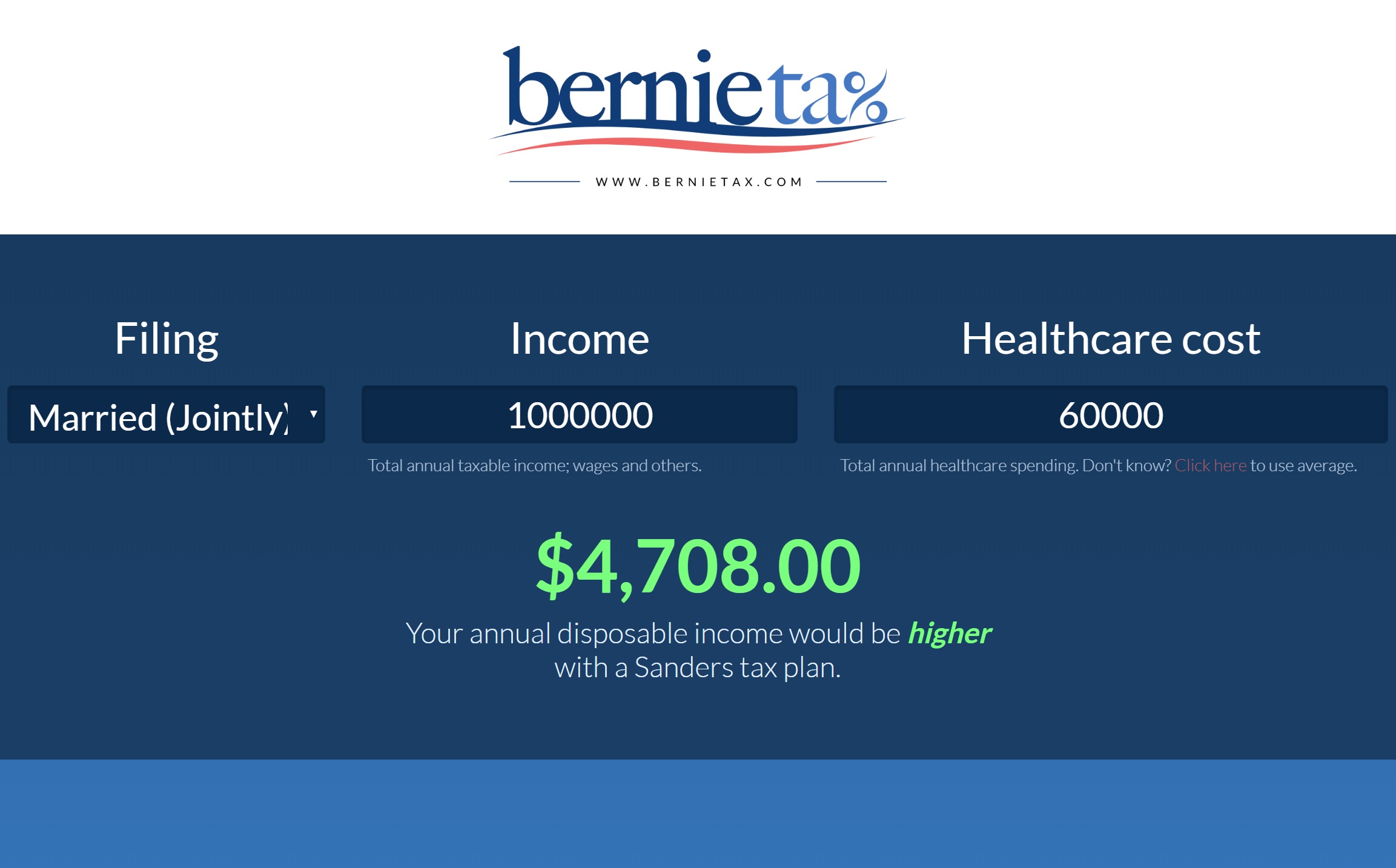 There is one presidential candidate who has always stood up for the little person. He has not bent to corporate interests, taken huge donations, and has always looked to improve the situation of every-day millionaires.  That is why his tax plan will help millionaires—he is a solid pro-millionaire candidate. Who is this democratic candidate out to increase the disposable income of your everyday millionaire? Bernie Sanders.

How can this be from the guy who allegedly wants to abolish billionaires? I was recently pursuing the internet, and stumbled upon the site http://www.bernietax.com. It allows you to pick a tax filing status (married filing jointly, single, etc.), an income, and a level of medical expenses, and it tells you whether your annual disposable income will increase or decrease. A married filing jointly taxpayer, taking in $1,000,000 of taxable income, with a mere 6% of their income used up in medical costs, will see an increase in their disposable income.

First, this site really focuses on an overall policy package. It is labeled bernietax, but, the effect being advertised also includes the effects of the healthcare changes that a President Sanders would favor. It highlights that a tax system runs in concert with many other economic and other policies, and just looking at taxes might be short sighted. We could have really low taxes, but, might be worse off if we lost things that we value that we buy with those taxes. It is a political, not an economic, question, how much we value these other policy objectives, and whether we should collect taxes to finance them.

Second, what other policy objectives you choose to pair with taxes is important. Bernie Sanders has taken a firm stance that healthcare is a right, and that the government should provide it for everyone. He also believes that a college education is a right that should be paid for by the government. Accomplishing free college will also increase the revenue required by the government. So, under a President Sanders, those who have a lot of income (even more than a million dollars), but who were going to spend a lot of dollars on healthcare and college, may be made better off. Similarly, a very low income person with no healthcare costs might be made worse off under President Sanders (indeed, married filing jointly, with $20K in income and zero healthcare costs would be worse off).  But, if housing or transportation were held out as some type of human right that the government will fund, then you would come to a very different solution. What we determine the government will pay for will have dramatic distributional effects, and in some cases (such as this one) even helping out those that these candidates would not be perceived as generally wanting to help.