Questions I Wish Senator Warren Would Ask Me 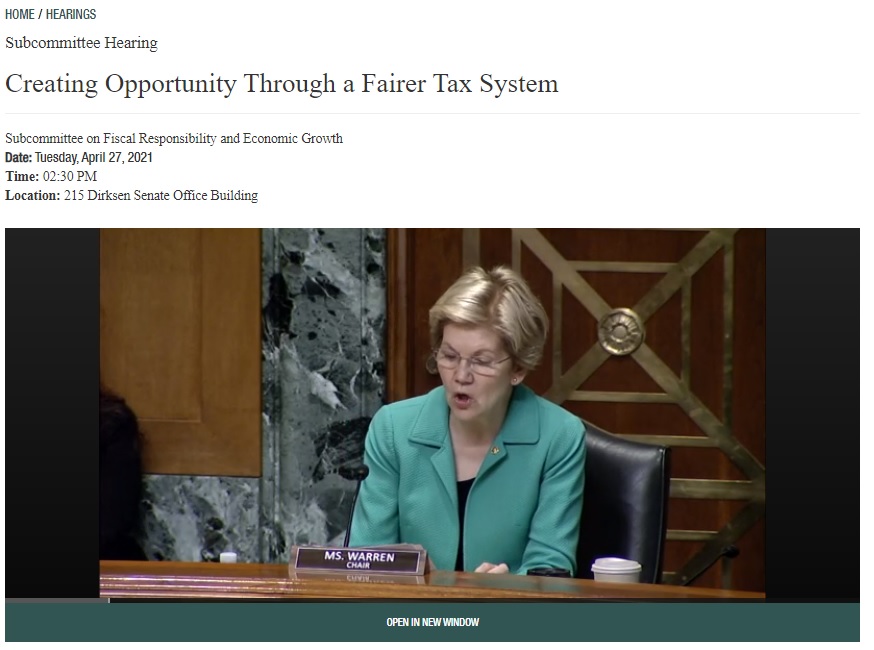 On Tuesday I testified before a Senate Subcommittee, chaired by Senator Warren, about our nation’s broken tax code. The week prior to the event, I prepared extensively for the event. I’ve been publically critical of Senator Warren’s hallmark corporate tax proposal, the Real Corporate Profits tax, so I went in expecting to be put through the wringer as she drilled me with hard questions.

I sat at my computer, gave my opening statement, and then waited for Senator Warren to pounce. Sadly, my wait was protracted. Senator Warren did not ask me any questions. In fact, she didn’t ask any questions to witness she did not invite—and she had not invited me. While I was spared the hot seat, I was disappointed. Why? Because I felt like I had answers to some good questions Senator Warren should have asked. Answers that could help us have more constructive conversations about tax policy, and that move us past the political rhetoric. Here are two examples:

Q: Isn’t it unfair that giant corporations use so many tax loopholes to pay so little in tax?

A: Thank you, Chair Warren for the question. With all due respect, there really are very few tax loopholes. The word loophole in this context is a politically charged term that in itself has little meaning. Let’s call them what they are: Laws passed by Congress, signed by the President, most of which are uncontroversial, achieve their stated objective, and, are perfectly legal. Calling them loopholes masks these facts. For example, I know it upsets you that Amazon and Nike properly and legally deduct compensation expense, as does any business. This is not a loophole—compensation is tax deductible. Further, Amazon gets a large R&D tax credit, because, as an innovator, they do research and development—just as Congress desired the more-than-a-dozen-times they have passed the R&D tax credit. It might upset you that FedEx carried back net operating losses, which you voted to expand through the CARES Act. But this is not a loophole—the entire Senate, including you, literally voted for it.

I understand you might not like these provisions. So, let’s have a dialog. Which specific provisions don’t you like? Instead of levying new taxes that increase the compliance burden and erode the confidence of the financial reporting system, let’s talk about getting rid of what you don’t like instead. And let’s talk about the details. I know that is doesn’t always make for good politics, but, it will force us to consider the tradeoffs we need to make, and help us create good tax policy.

Q: Isn’t it unfair that wealthy individuals use so many tax loopholes to pay so little in tax?

A: As I mentioned above, the term loophole is not helpful. It degrades our public conversation, masks real underlying problems, and stands in our way of meaningful tax discussion. There are several reasons the wealthy don’t pay as much in tax as you would like them to. These include the fact individuals don’t pay taxes on capital gains unless they sell an asset, lower tax rates on capital gains and dividends, step-up in basis at death for capital gains, deductions for charitable contributions, the fact that we allow private foundations owned by their benefactors to have certain tax advantages, among others. Let’s talk about these issues. Maybe let’s change some of them! It’s OK to have different preferences for the scope of government, the provision of social goods, or how redistributive our tax code should be. But let’s talk about it. Let’s try to actually make some progress by talking with each other about the actual tax law, the values and aspirations it represents, and how we can change that law to make the country even better.

I’ve pointed out significant problems with Senator Warren’s proposed tax policies in the past. I wish I could have talked more specifically about them, because the US tax system needs improving, and we should not do so with her flawed policies. We need to have a serious conversation about how to fix the tax code. Using language suggesting the wealthy are all “tax cheats” who spend all their time fishing for tax “loopholes” isn’t helpful. We need more sincere dialogue, and fewer monologues and soundbites. We need less hand waving and hand wringing, and, more discussion and dialog. We need more sincere questions, sincerely answered.